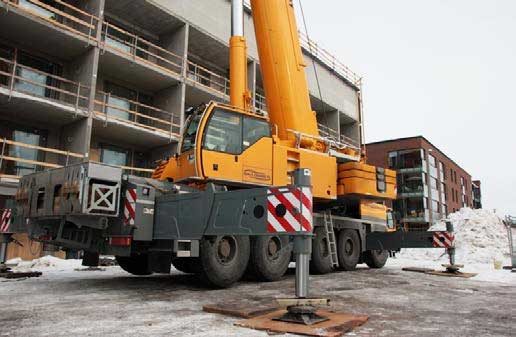 When the competition is fierce, there is no room for error. Ojala Cranes Oy is a Vantaa-based lifting service company whose strength is high-quality equipment, flexibility and reliable customer service. This message has also ripped through the ears of customers. Let's go lift.

The meticulous expansion of the Helsinki Metropolitan Area continues despite the weak economic outlook. This can be assured as you walk through the day on construction sites that expand residential areas. There are small and bigger apartment buildings, terraced houses, detached houses and if any kind of croft. What all of these have in common is that lifting services are needed as a lifeline for construction.

Ojala Cranes, who holds his depot on the arm of the perimeter third, is one of the lifting forces in the Helsinki metropolitan area. Lifting service Veikko Ojala was founded at the end of the 1980s and in 2007 it was sold to a larger company. In 2009, operations resumed by Seppo Ojala. There was an order for a smaller and more flexible lifting service and Seppo together with his father Veiko decided to offer it. So the company was basically new, but practical experience can now be found for more than a quarter of a century.

With suitable equipment. Currently, the largest employer is construction companies operating in the Helsinki metropolitan area.

"In practice, we move inside and around the Ring Road Three, there has been little need to go further," says Seppo Ojala.

This is clearly the case, as most of the company's machines are on construction sites on the day of the conversation and can be found when searching in Helsinki and Vantaa. The machinery is new and in tonne-meters they are in the medium size category. The average age of the fleet is a maximum of seven years and the most sought after size is in the 100 tonne category. There is currently quite a bit of demand for small machines and larger machines would sometimes have to pick up a gig even further away. Instead, on construction sites, a medium-sized machine already does almost the job after the job. For example, since the company’s largest machine, the 200-ton Liebherr LTM-1200 came into the house a year ago, it has been in demand iron. During the year, it has had time to visit the depot to breathe about five times. Otherwise, it spends its time on construction sites or on their way to them, says sales manager Juha Horn. Brand policy relies almost exclusively on Liebherr. One of the biggest reasons is the absolutely well-functioning technology and maintenance - without them, the company's security of supply could be in a completely different category. Now the schedules keep almost open in terms of technology.

Relying on the service. During our tour, the 200-tonne machine being lifted at the apartment building site near Itäkeskus is best suited for lifting elements on large construction sites. Each construction site is planned according to needs in advance, and Ojala Cranes offers an expert service to help. Support leg pressures, lifting capacity calculation and other important preparations can be taken

Every construction site is planned
in advance, preferably with the expert assistance of lifters.

taken into account by the people of the house often better than by the subscriber. If necessary, it is also possible, for example, on behalf of a construction company from another location, to describe and examine the plot in advance so that the construction team has some idea of the conditions at the erection site. Juha Horn is almost always going from one construction site to another due to various planning tasks and negotiations. Customers have a great deal of trust in this advance planning service and it is widely used. This often leads to clear savings, as the costs of ordering a machine that is too small or canceling a lift due to incorrect conditions, for example, are borne by the customer.

Ojala's biggest machine is a year-old 200-ton Liebherr. this has been quite a popular device and it hasn’t just had time for the depot to spin.

A rare feline. The specialty of the house is LTC-1045 or Panther. This is the first of its kind in Finland and it is a so-called city crane. It is a 45-tonne mobile crane with one cabin, which, thanks to its agility and three axles, can accommodate even cramped construction sites. However, the 49-meter boom provides access to very extensive lifting tasks.

Best of all, the plane has a cabin. Namely, it rises to a height of up to eight meters. For example, on detached house construction sites, it is a great solution when lifting behind a visual barrier. There is no need for a separate marker, but the driver can see where the load is going when lifting the cab.

One of Liebherr's advantages is that even though the machines are of different sizes and may have different solutions, the work environment is very similar, Veikko Ojala says. This makes it easier for drivers to jump from one machine to another when needed. As a rule, every driver has their own receipt machine, but sometimes there will be exchanges. Skilled people have been drawn into the taps of the machines, which is also a familiar thing to the customers. In addition to a specific machine, many customers can also request a specific driver for the construction site.

Basic breakfasts and special gigs. In the row forest, wall elements are installed on Quattro-Rakennus Oy's house site using a 100-ton Terex AC 100-2. Rauno Rantasuomela, who works as a site master, says that as a customer, they specifically demand an experienced driver and a suitable machine in a suitable place. It is clear that everyone must first practice to become experienced, but they do not dare to take first-timers to construction sites, Rantasuomela explains. The design service and expert help are also welcomed here, so the responsibility for the success of the lifting is in the best hands.

Known as a city machine, the Liebherr LtC-1045 is suitable for work where good visibility to the destination is especially important. The machine is the first of its kind in Finland and has been very satisfied with it from the subscribers, the driver and the owner.

The one-brand policy makes it easy for drivers to jump from one machine to another when needed.

There have been no problems with Ojala and co-operation has been established for a long time, as have many other construction companies in this area.

Although, as a rule, the building material is lifted, sometimes even more special gigs happen. Juha Horn talks about a recent lifting operation that was completely different from the others. After decades of Ojala's efforts to keep the burden from falling, we now had to do something quite the opposite. The study course for piano tuners organized a graduation party, the program number of which was to drop the right piano from a height of 30 meters to the ground. For this purpose, a hook release device was ordered from America, and thus this customer also got the service he wanted. The playing game was crammed into the tantrum as the party crowd and TV news watched the distance from the delivery.

This is a good reflection of Ojala Cranes' operating principle. Even more special items are aimed at being implemented in exactly the desired way from the point of view of customer satisfaction. Only in this way is it possible to cope in a tough competitive situation on the surface, Ojala is inched - and implemented.

OUR FLEET IS STRENGTHENED WITH THE THIRD NEW LIEBHERR LTM 1095.5.1

ANOTHER LIEBHERR LTM 1060.3.1 CRANE RECEIVED IN THE VEHICLE

Request a quote! We will surely find a solution that suits you.

Ask for a quote